I have just had the pleasure of attending The Comedy Murder Dinner, Murder on the Titanic at Bolton G Casino. We had a fantastic night watching an excellent cast and being served by first-rate staff.

We arrived at the casino at around 7.10 p.m. to a busy reception area. As we were not already members we had to sign up, which was sorted out quickly and efficiently by Andy. We were then shown into the bar area where we could get ourselves a drink while we waited to be seated. The restaurant area was situated at the back end of the casino away from the hustle and bustle and with its own private bar.

The Entertainment:
Once we were seated, the characters from the Titanic introduced themselves. The scene was set and Leonardo Di Haribo had just saved all the lives of the passengers aboard the cruise liner Titanic by spotting an iceberg and sounding the alarm.He was now attending a celebratory dinner with the first class passengers from the G Casino. There was some chatting and flirting amongst the characters, with Kate Windswept saying ‘I’ll see you later!’ with a wink to Leonardo.

The lists of characters were:
Leonardo (A struggling penniless artist who won his ticket aboard the ship in a game of cards).
Kate (A rich English socialite who was travelling to America to wed William Inzane).
Captain Birdfry (A sailor of 30 years, who had been asleep when the alarm was raised).
William Inzane (Kate’s fiancé, and a mean tyrannical business man) and Kathy Betts (A ‘new money’ loud mouth who had recently come into fortune thanks to her sister marrying a Las Vegas casino owner).

As the characters left the scene there was a struggle from behind a corner and a splash of water, with someone shouting ‘man over board!’

From this we meet the policeman who is on his holidays and decides to take the case to see who murdered Leo Di Haribo. He is then accompanied by Dave Ja Vu, a geeky character who has come aboard the ship in hope to meet a blind date, who had stood him up.They set to work to uncover who the murderer is. They interacted with the audience brilliantly, moving from table to table so that guests could ask questions. Guests were encouraged to watch each character’s every move and to cross-examine them carefully.

Once Captain Birdfry and Kathy Betts had been cross-examined it was time for the main course.

The Food:
There was a choice of Slow Roasted Lamb Shank, with herb mashed potato and a red currant jus, Thai Spiced Fishcakes, served on a bed of stir fried greens or Leek and Mushroom Au Gratin, with a side salad and garlic herb ciabatta. My partner and I had both pre-ordered the lamb. It was absolutely delicious and everyone on the table enjoyed their meals. The presentation was great and the service was excellent. The desserts soon followed after another quick chat with each character, who visited each table. The dessert options were Salted Caramel Chocolate Tart, with vanilla ice cream, Apple Crumble, with custard or Fresh Fruit Salad. I had ordered the Caramel Chocolate tart for myself and the Apple Crumble for my partner. Both were very good and we both polished them off.

When all plates were clear it was time again to speak to the characters. We now questioned Kate Windswept and William Inzane about their connections to Leo and if they had a motive to kill. The policeman prompted people in the right direction as sometimes they seemed to be swerving away from the right lines.

Once all the information was gathered in, it was time to decide who the killer was and what their motive was. Everyone had to write this on a form and hand it in to the cast. The correct answers were then put into a hat and the name which was picked out won a prize.

I had an amazing time at this event; it was my first night out since having my son 4 months ago. I wanted to do something where I would still have a great evening and not have to drink. I definitely chose the right venue. I couldn’t fault anything. The staff were very friendly, and Frank the barman was fantastic. We didn’t have a dry glass all night.

I loved how the cast really interacted with the audience. Everyone really got into it. It was a very funny show with lots of laughs.

I would recommend To Die For Entertainment events and have even encouraged my parents to book onto their next event at G Casino Bolton, Five go Mad in Bolton which is a take on the Enid Blyton story.

For more information on To Die For Entertainment Murder Mystery Dinners click here. 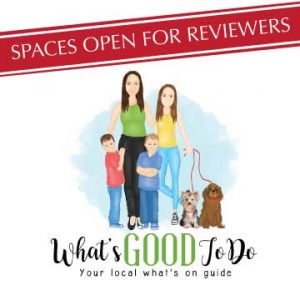